Share it! Science : Glimpse of the Garden: Week 16, Tendrils- Plants in Motion

Glimpse of the Garden: Week 16, Tendrils- Plants in Motion 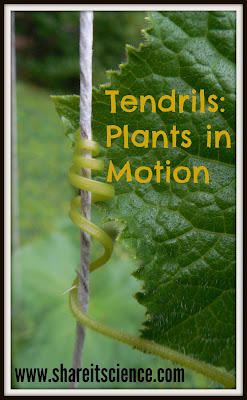 Beyond flowers, I think plant tendrils are one of the most beautiful things that develop in the garden. We've had a lot of spiraling tendrils twisting and turning this week. It turns out that scientists and botanists have been interested in this phenomena since Darwin! Just a few years ago, researchers unlocked some of the mysteries of cucumber tendril spiraling. Their discoveries are explained in this episode of Science Friday:

Once I learned more about cucumber tendrils, I noticed the same peculiar winding on my lemon cucumber vines!

Another one of my favorites is the morning glory. I love to watch as they slowly spiral up the trellis.

Here is a time-lapse video of morning glories in motion.


Roger Hangarten is a researcher at Indiana State University with a particular interest in plant motion and time-lapse video. Visit his site, Plants in Motion, for some other fascinating plant video!

The scientific term for the winding and bending movement in plants is: nutation. Where are you seeing nutation in your garden?

What else is "growing" on?