Share it! Science : Saturday Science Experiment: A 2 for 1 Snow Experiment

Once the snow melts you'll notice that the level of water is not nearly as high as the amount of snow you put in the jar. Why is this?

This can lead to some really interesting discussion. What would happen if all the snow melted today? What would it be like if the snow was as dense as water? What would happen if we dumped all the snow into the ocean? What else do we know about ice and snow? Does the lake freeze all the way to the bottom? Where does frost come from? What makes an icicle?
Also, no matter how white and new the snow looks, you'll see that your sample has tiny bits of things floating in it once it has melted. This might give your children, (or even you?) some pause when it comes to munching on snow!

Snow needs tiny dust particles in order for its beautiful ice crystals to form. [There are some great links on frost and snow crystal formation in my post from earlier this week- "Frozen Bubbles and the Science of Ice Crystals".] In addition to these little bits of dust, there can be pollutants in the air and other debris that has blown around with the snow. Depending on where you are, eating snow most likely won't do you harm, but it is good to know that it is not necessarily as clean as it looks!

This experiment can lead to discussion about snow formation and what floats around in the air. Do you have a favorite snow experiment? Comment below or e-mail me at shareitscience@gmail.com 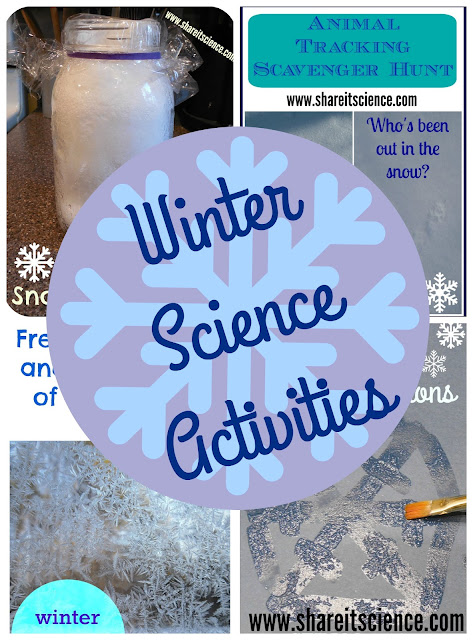