Invasive Species- on your plate! 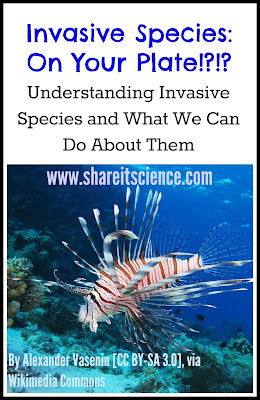 Last year I had my students design logos for the imaginary "Invasive Eaters" club as a fun activity to wrap up a unit on adaptations and invasive species. We had read an article on eating invasives as a management technique and thought that it sounded like a funny and smart tactic. Turns out we were not the only ones interested in this idea. Special dinners are popping up around the country challenging chefs to create palatable dishes that include invasive species as ingredients.
An invasive species is a plant or an animal that has been introduced to an environment and due to lack of predators or other factors to keep it in check it spreads, often causing damage to the native environment, human health or economy. Generally the spread of invasives is caused by good intentions gone wrong- we thought they could solve an ecological problem, we hoped to breed it with a similar species for advantageous traits and economic pay-off, we planted it for its ornamental value in gardens, etc. etc.

Unfortunately, nature is too complex for us to predict the consequences of moving species around the globe. Despite our efforts to remedy the situation there are some examples of invasive species without a good method of eradication. Although eating invasive species is not going to solve the problem, it is a creative way to chip away at it.


Recently the Society of Environmental Journalists in New Orleans challenged chefs to include an invasive species in their menu for one night. Each refused except for the intrepid Johnny Blancher of Ye Olde College Inn. He took the challenge on with gusto and created menu items featuring the nutria (a large invasive rodent), Formosan termites, tiger prawns, purslane (a leafy green), and wild boar. Although some ingredients sound formidable, Blancher rose to the occasion and pulled off the meal with great success. Another annual invasive-eating event is held in Oregon by the Institute of Applied Ecology. The "Eradication by Mastication" dinner features menu items such as wild boar sausage, buttermilk-fried bullfrog legs, deep fried nutria, Asian carp boulettes, and braised wild boar with Himalayan blackberry glaze.

Cooking with invasives does not need to be limited to special event dinners with high end chefs- several groups are dedicated to educating others about the consumption of invasive species. Online resources such as Eat the Invaders and Invasivore offer up recipes, news items and biology of invaders for the public. Cookbooks for invasives such as the Lionfish Cookbook  by REEF, an organization that works to preserve marine life through education and research, are now being published.

The Lionfish is causing many headaches in the ocean, but may not be the best invasive species to begin with if you are interested in becoming an invasivore. It is easy to catch, but with it's venomous spiky fins, difficult to process. If you are someone who already enjoys foraging for wild edibles, then you might be up for the challenge of gathering and cooking up some invasive species.

Although this is a unique and quirky method of eliminating some invasive species, it most likely won't be the end all be all solution to the invasive problem. Some are wary, within reason, that if we get a taste for particular invasives, then this might open the door to a high end restaurant market where the species are actually bred and farmed- which would only perpetuate the problem. There is also the difficulty of meat inspection and public health regulations that would make cooking and serving wild harvested food (particularly meat) a challenge. Despite these challenges, I think we can and should enjoy a meal or two featuring these organisms. As long as we continue to come up with creative solutions to these issues I believe that we can at least educate to prevent future invasive species introductions, and maybe solve a few problems along the way!