Listen to Your Mother! 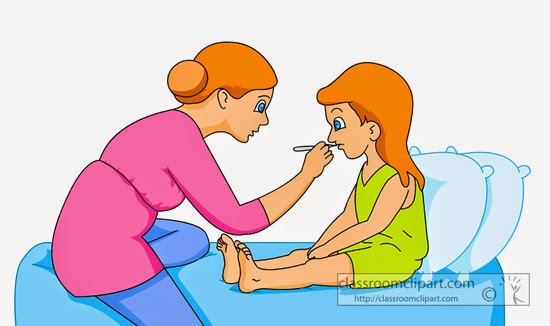 Don't run with scissors. Wait 40 minutes before swimming after you eat. If you don't dress properly outdoors you'll catch a cold. Chew your food 24 times before swallowing. Moms are full of advice, most of which has been handed down from their mothers. Although it is often good advice, seldom is it scientifically sound. A recent study, however, gives some credence to the idea that staying out in cold temperatures can make you sick. Although through the years many have argued against this morsel of advice, scientists have found that the rhinovirus, or the common cold, reproduces more quickly in colder temperatures.
It has been understood for a while that the common cold replicates itself better in the cooler temperatures of the nose than the warmer temperatures of the lungs. Researchers at Yale studied how this fact is related to our immune response against the virus. They compared the immune response to the cold virus in mice at 37 degrees Celsius (regular body temperature) to the immune response in mice at 33 degrees Celsius. They found that the immune response was not as effective at the cooler temperatures. They also discovered that the temperature is what made the difference in how the immune system behaved, not the virus itself. Although this study was carried out using the immune response of mice, it is very likely that the principles apply to humans as well. This research not only backs your mom's advice up, but also could give way to understanding how cold temperatures can affect children with asthma.
At any given time approximately 20% of us are carrying the common cold around in our noses. This time of year is often when it causes us the most trouble. Some good advice that the CDC, doctors and mothers would agree on is to wash your hands often with soap and water, try not to touch your eyes, mouth and nose when your hands are not clean and steer clear of those who are sick. Do us all a favor and take a sick day if you need to, this may be easier said than done for some, but it makes a big difference!
Another bit of new advice doctors might give is to give and receive more hugs. Yes, that's right, another recent study published in Psychological Science indicated that people who have more social support and receive more hugs as a result are less likely to catch the common cold! Additionally, the researchers found that people who already had a cold and had this increased level of support and hugs had less severe symptoms. This research is so new it might be too early to resolve the discrepancy between the advice to steer clear of sick people and the notion that they need more hugs, nonetheless, some thought provoking information! New words to live by for a healthy winter: Give hugs, wash your hands, cover your nose in the cold. I think moms everywhere would approve.